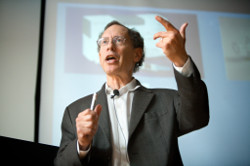 Cornell graduate and Charles Stark Draper Prize winner Robert Langer (Chemical Engineering, B.S., 1970) developed a porous polymer drug delivery system to treat certain tumors. He also developed implantable microchips that could release drugs on command. In 1988, he discovered the use of polymer-based scaffolds on which human cells could replicate and flourish. This discovery started the field of tissue engineering. Langer, who has founded 25 companies, holds nearly 1,100 patents worldwide and is the most-cited engineer in history.In 2004, Parade magazine named him as one of six “heroes whose research may save your life.”