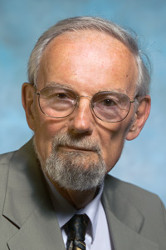 Jim S. Thorp (Ph.D., 1962; M.S., 1961; B.S., 1959, electrical engineering) co-invented (with Arun Phadke of Virginia Tech) the phasor measurement unit (PMU) for which he was elected to the National Association of Engineering and won the Benjamin Franklin Medal in Electrical Enginering (also won by Edison, Einstein, Steven Hawkings, and others). These PMU units are now ubiquitous in utility systems worldwide with more being installed every day. Their pioneering contributions to the development and application of microprocessor controllers in electric power sytems. This played a key role in diminishing the frequency and impact of blackouts